Dentaqua Ecasol™ is a product of Electro-Chemical Activation (ECA). ECA is the process of passing a diluted saline solution and water through an electrolytic cell to generate environmentally friendly, highly active, high redox potential, meta-stable disinfectant solutions¹.
Ecasol is a pH neutral water-based solution and is non-toxic² and non-corrosive³. It is proven to destroy all known microbes⁴ including viruses, fungal spores and difficult to kill biofilm.

Ecasol is many times more effective than traditional disinfection techniques such as chlorine dioxide, hydrogen peroxide and ozone, and is up to 100 times more effective than traditional bleach. It has a varied range of application types⁵ and can be applied in liquid form for surface disinfection and aerosol (fog) form for environmental decontamination.

Ecasol is highly sensitive to organic matter whereupon with contact the active species are neutralized and it reverts to its original form, water and salt¹.
Unique to Dentaqua, it’s technology produces a water solution containing activated hypochlorous acid (HOCI) plus activated short-lived reactive oxygen species, all at a physiological (neutral) pH.

Activated HOCl and reactive oxygen species are well-known and well characterized oxidants that are the critical compounds produced by human and animal immune systems to fight infection. Activated HOCl and reactive oxygen species naturally protect the body from infection, are extremely effective at killing pathogens, such as bacteria, viruses and fungal spores, yet is safe to man, animals and the environment.

Dentaqua’s ECA technology mimics the human immune system by producing the same active compounds. These have a range of applications beyond general disinfection including human health⁶ and dental⁷ applications.

When an invading pathogen or infection threatens a human or animal cell, the body’s immune system responds by destroying the pathogen before it can harm the cell. The invading pathogens are engulfed by white blood cells called neutrophils by the process of phagocytosis. Once engulfed inside the neutrophil cell, a pathogen is encapsulated by a phagosome, which generates activated HOCI as the final step of the Oxidative Burst Pathway, the centrepiece of the phagocytic killing mechanism.

Large quantities of HOCI are released into the phagocytic vesicle to destroy the invading pathogen.
During the Oxidative Burst Pathway, neutrophils use the naturally occurring NADPH oxidase enzyme complex which catalyses the conversion of oxygen into superoxide anion.

When a wound breaks the skin, it creates a gateway for harmful pathogens to invade cells.
Neutrophils, which are a type of white blood cell, live in blood vessels.
When pathogens invade a cell, neutrophils travel to the infection site to destroy the invading pathogen. The first step in this process is engulfing the pathogen.

Although Ecasol is biocidal on pathogens and all microbe types, it does not adversely affect human or animal cells¹. These cells protect themselves using an extensive, highly effective group of protective agents and defense mechanisms referred to collectively as the Antioxidant Defense System (ADS). Pathogens, however, do not possess this ability.

Dentaqua’s DW-8 device produces Ecasol on-site, on demand and at ready-to-use concentrations. Ecasol requires no special handling, is contact-safe and does not require PPE to be worn when used as intended. 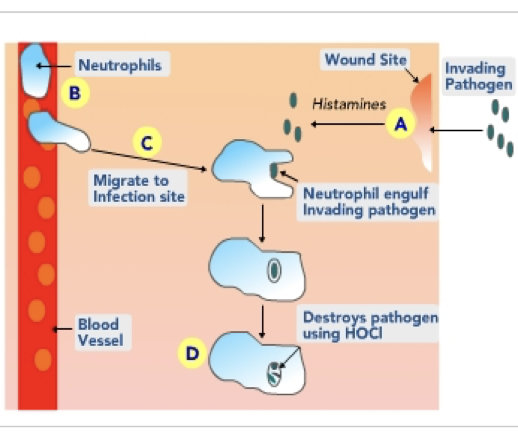